Please support the house of Allah and donate generously.
May Allah build for you a house in Jannah.

In the name of Allah, the Most Gracious, the Most Merciful

All Praise is due to Allah for granting us the blessed straight path.  It is His promise that whoever walks on this path, shall have all theirs sins forgiven and be met with Divine Mercy.

All good is from Allah and it is His favors and mercy that we celebrate.

Remember to support the Islamic center and the community with your donation.  You may also give your zakat here.  May Allah reward you from Himself and multiply whatever you give without limits.

“The parable of those who spend their substance in the way of Allah is that of a grain of corn: It grows seven ears and each ear has a hundred grains. Allah gives manifold increase to whom He pleases and Allah cares for all and He knows all things.”(2:261)

Say, "O My servants who have transgressed against themselves, do not despair of the mercy of Allah. Indeed, Allah forgives all sins. Indeed, it is He who is the Forgiving, the Merciful."

Establish the Prayer for Allah

The masajid exist for one purpose, to establish the remembrance of Allah upon the earth.  Allah says in the Quran:

‘In houses (mosques) which Allah has ordered to be raised, in them His name is remembered. Therein glorify Allah in the mornings and in the afternoons or the evenings.’ (Surah An Noor 24:36)

Abu Huraira narrated that the Prophet said ‘The reward of the prayer offered by a person in congregation is multiplied 25 times as much as that of the salat offered in one’s house or in the market alone. And this is because if he performs wudu and does it perfectly and then proceeds to the mosque , with the sole intention of praying , then for every step he takes towards the mosque he is upgraded one degree in reward and one of his sins is taken off from his accounts. When he offers his salat , the angels keep on asking Allah’s blessings and Allah’s forgiveness for him as long as he he is at his Musalla (place of prayer) .They say ‘O Allah ! Bestow your blessings upon him, be merciful and kind to him. And one is regarded in salat as long as one is waiting for the Salat. [Bukhari] 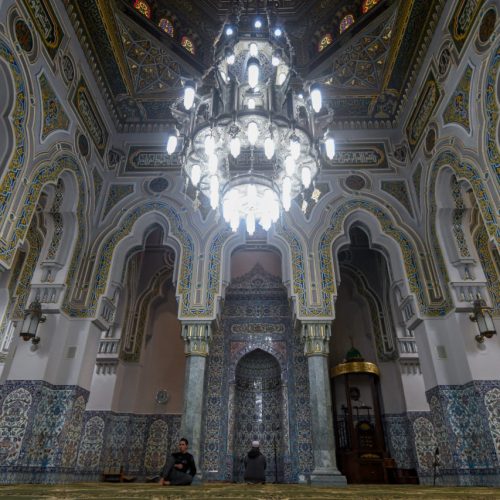 The Islamic Center (المركز الاسلامى)  was officially opened in June of 1952. From its inception, it had set its goals of promoting a better understanding of Islam in the United States. It is an institution that stands ready to help anyone who may reveal a desire to embrace Islam and serves as a source of guidance for Muslims. It provides Qur’an and Islamic Literature and distribution of such publications that would create awareness and knowledge of Islamic Truth.
The Islamic Center provides help to the needy by extending assistance (zakat) especially to families in distress.

Other activities of the Islamic Center include:- Officiating marriage ceremonies to wedding couples
– Organizing language and religious classes both for adults and children

– Welcoming visitors and meeting their anticipation of gaining knowledge about Islam

– Providing a research center equipped with an adequate library

In November 1944, the idea for building a Mosque in Washington DC was born through a discussion between Mr. M. Abu Al Hawa and the former Ambassador of Egypt, Mr. Mahmood Hassan Pasha.
Soon thereafter, a handful of diplomats and American Muslims formed the Washington Mosque Foundation. The Foundation’s membership quickly grew to include representatives from every Islamic nation in the world and American citizens. They all supported the Foundation’s appeal for funds. They managed to raise enough money that enabled them to purchase the land that the Center sits on now on Washington’s “Embassy Row”. They purchased the land on April 30, 1946, and laid the cornerstone on January 11, 1949.

Prof. Mario Rossi, a noted Italian architect who built several mosques in Egypt designed the building. Egypt donated a magnificent bronze chandelier and sent the specialists who wrote the Qur’anic verses adorning the mosque’s walls and ceiling. The tiles came from Turkey along with the experts to install them. The Persian rugs came from Iran, which are still in the mosque of the Center.
Finally, with its completion, the Islamic Center’s dedication ceremony took place on June 28, 1957. Former United States President Dwight D. Eisenhower spoke for the American representatives. In his address, he praised the Islamic world’s “traditions of learning and rich culture” which have “for centuries contributed to the building of civilization.” He affirmed America’s founding principle of religious freedom and stated that: “America would fight with her whole strength for your right to have here your own church and worship according to your own conscience. This concept is indeed a part of America, and without that concept we would be something else than what we are.”
Eisenhower concluded: “As I stand beneath these graceful arches, surrounded on every side by friends from far and near, I am convinced that our common goals are both right and promising. Faithful to the demands of justice and of brotherhood, each working according to the lights of his own conscience, our world must advance along the paths of peace.” 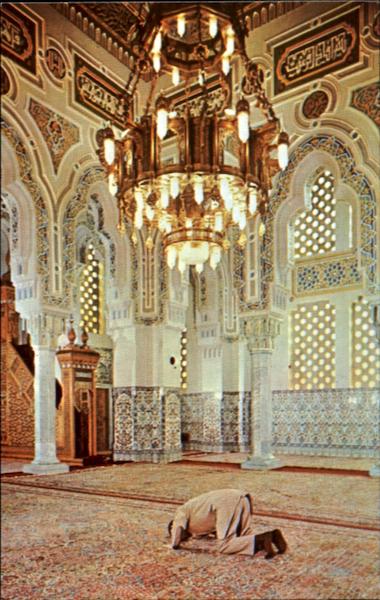 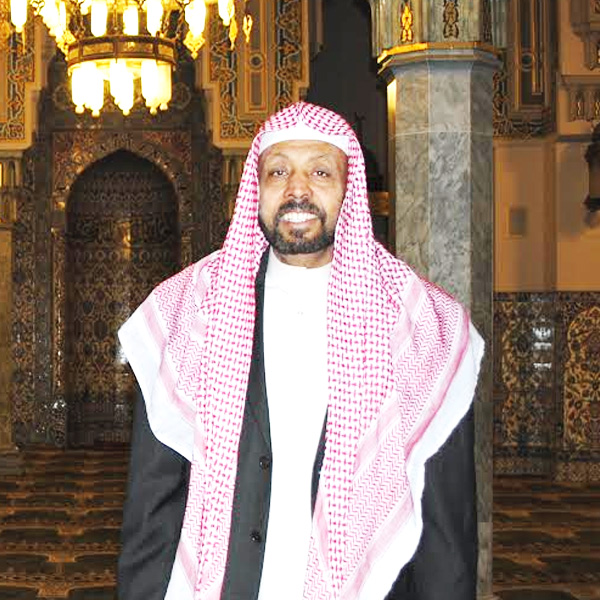 In the name of Allah, the Most Compassionate, the Most Merciful

As we advance in technology and especially in communication we realize how we can view what is taking place not only in one area but rather around the world. Lately many events that are taking place in the Islamic world moved many people to seek more knowledge about Islam, Muslims and the Muslim countries. Some sought out more information about the religion in an effort to understand.

Unfortunately, some have become confused by the often contradictory answers and examples they find about the religion which could present a distorted picture of Islam. As we witness the current event we realize that many non-Muslims perceive Muslims as back-worded and quick to react. This is not the case with all Muslims. The Qur’an (the Muslims Book of Guidance) calls for a healthy normal human life that is congruent with the natural make up of the human being to create healthy individuals, societies, and nations. Allah the Creator shows that all this can be achieved through proper knowledge and wisdom. Knowledge in general and divine knowledge in particular helped us reach this level of advancement. Such advancement facilitated faster communication and clear understandings of human relations to reduce the lack of understand among people about each other.

Communication the key to human relation especially when it comes to religious values and their effects in our lives as human beings. To make use of technology and its tools, our site presents the basic foundations of Islam and its teaching as a divine religion. Islam is not a new religion, but a continuation, confirmation, and completion of the previously revealed divine messages sent in stages, and poured out in measure to mankind. Allah says: “This day have I perfected your religion for you, completed my favor upon you, and have chosen for you Islam as your religion” (5:3) As our needs grow to understand Islam, this site focuses on the basic principles of Islam and shows that Islam is the guidance and light needed to achieve the proper life for better psychological and social health along with scientific advancement.

The Islamic Center of Washington D.C. welcomes all to come & worship. The Islamic Center traces its origins to a need, more than fifty years ago. It was created to become a place where muslims in the Washington DC metropolitan area could perform basic religious duties and prayer. It was at the funeral of an eminent Muslim that the void was felt most acutely. Muslim dignitaries present at the event set out to build a mosque. That basic cornerstone – the mosque – would through various stages of its development, evolve into what is now known as the Islamic Center. In spite of the many years that have passed, the basic mission has always been to serve as a place of worship for Muslims – which is still deeply rooted to the core of the Center. In line with that mandate, the mosque is open to all. All are welcome to come and worship day and night, during the regular times of the mandatory prayers. The mosque opens 30 min. before the call to Fajr (dawn) prayer and is open until one hour after the Isha (final) prayer. Then all access to the Islamic Center is restricted until it reopens its doors for the regular business activities at 10am. The Islamic Center prohibits people to stay in the mosque after closing time. The mosque is a place of worship and sleeping there is strictly forbidden. For more information about the prayer times, please visit our page on Prayer Times.